A super fun activity that will be a crowd-pleaser for your young men and young women! AN ESCAPE ROOM! Solve clues, figure out what’s next to finally open the treasure! A great test of your wits! 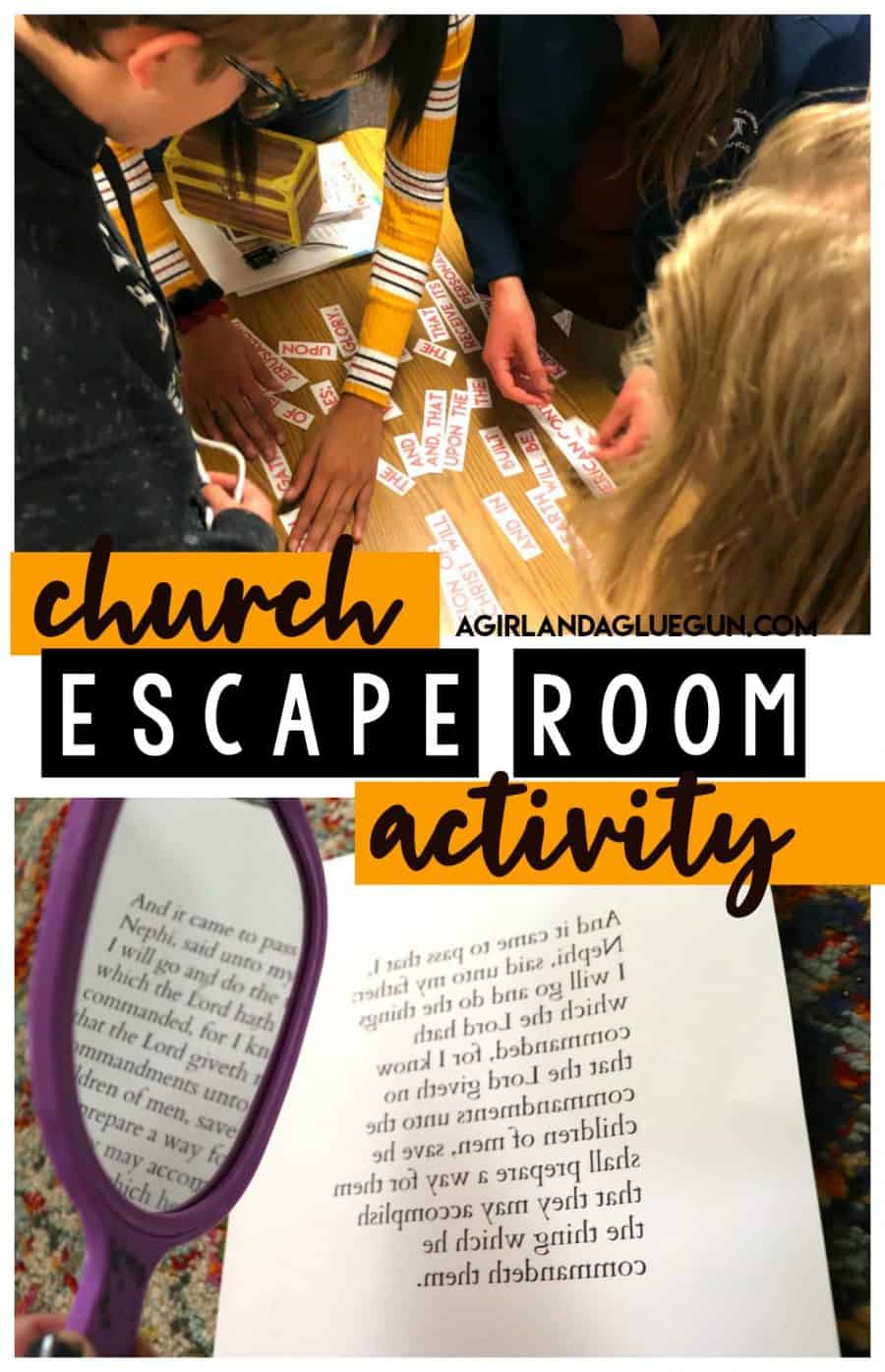 This escape room is set up with specific things from my church- like articles of faith and certain books. If you would like to learn more about my church, Head HERE! But you can take the same basic ideas and adapt them for your church!

Here is what I grabbed around the house to stage the area. We needed the scriptures and the true to the faith–so I wanted to throw them off by adding in a bunch of stuff they didn’t need! You need the blue pen- it’s a secret message decoder. But I added pens and pencils so it wasn’t so obvious! 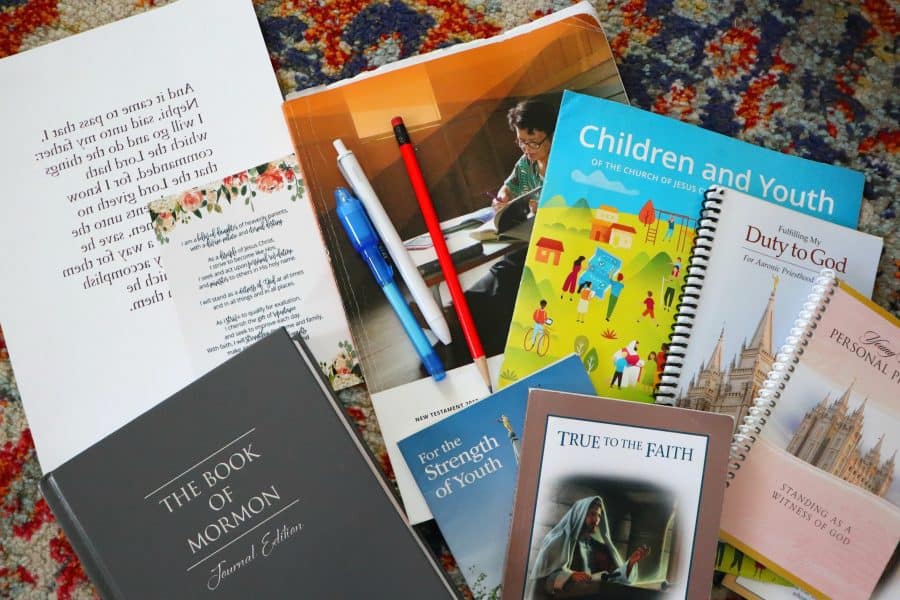 Here is what you need:

(I will go in more detail for each room)

All the info and printables you will need are down below!

Rooms: We had this set up in the Young Woman’s room. We have three rooms with two pull accordion doors to make the rooms. So we pulled each giant partition closed and put a lock on each handle. The first room was to get to the second room. The second room was to open the treasure chest, solve the clue to open the lock to open up to room number 3. The third room was to solve the puzzle to find the key to open up the suitcase in the middle of the room. Keep in mind- none of the locks really locked anyone out. They could have opened the suitcase, treasure chest, or door at any time! It was on the honor system! If you don’t have a big room–you could just rotate from one room to another.

There are 3 pictures of prophets on the chalkboard and a primary hymn book is open to latterday prophets. This room’s lock is a an old school locker- 3 numbers. right, then left then right. My goal was to do all 3 prophets in their order. So 16-1-6 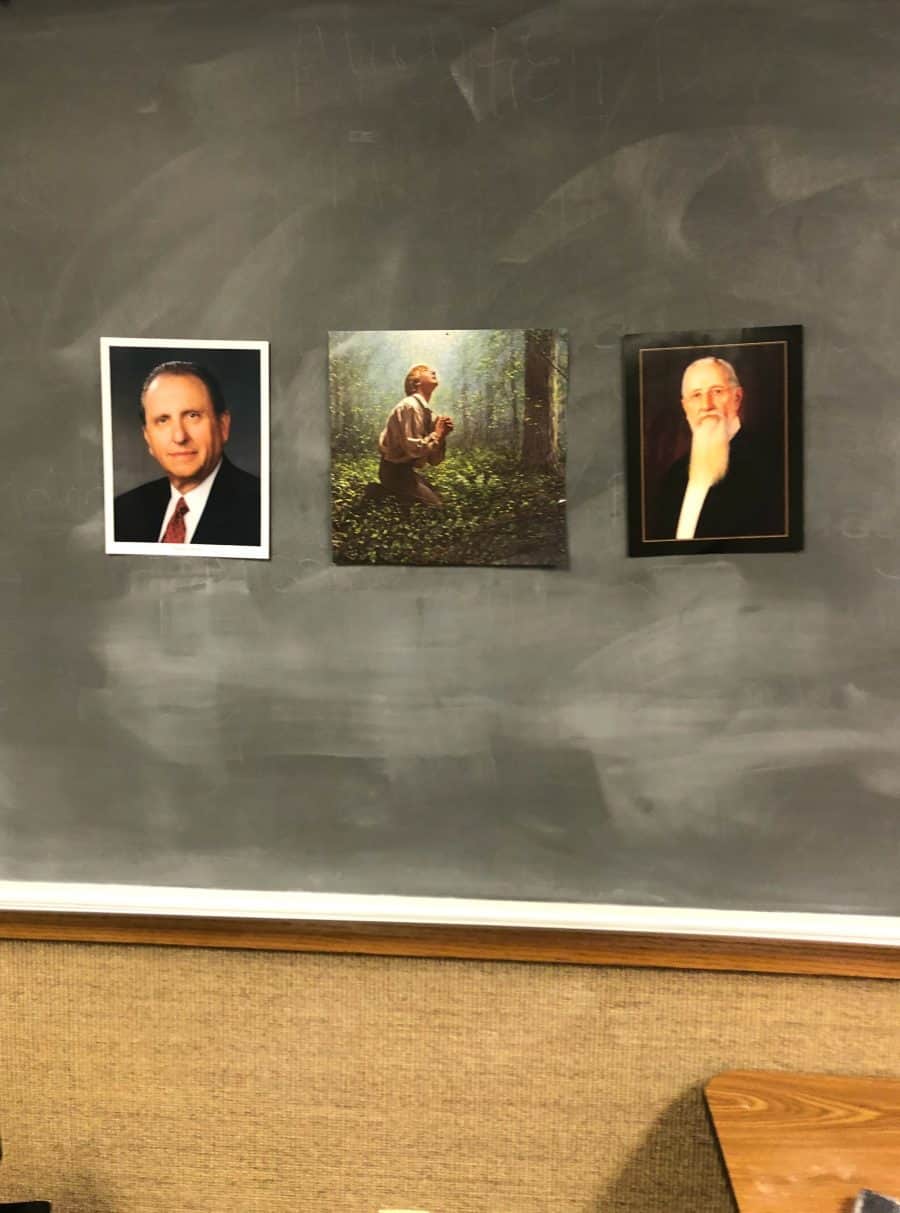 A. The girls got really close right away- so I’m glad I opted instead for 26 instead of 1. BUT–they did miscount and they kept putting Pres Monson as 15 (the hymn book song only goes up to Ezra Taft Benson so they had to remember from memory!)

I did give them a hint and pointed to the hymn book after about 10 minutes to keep them on track. 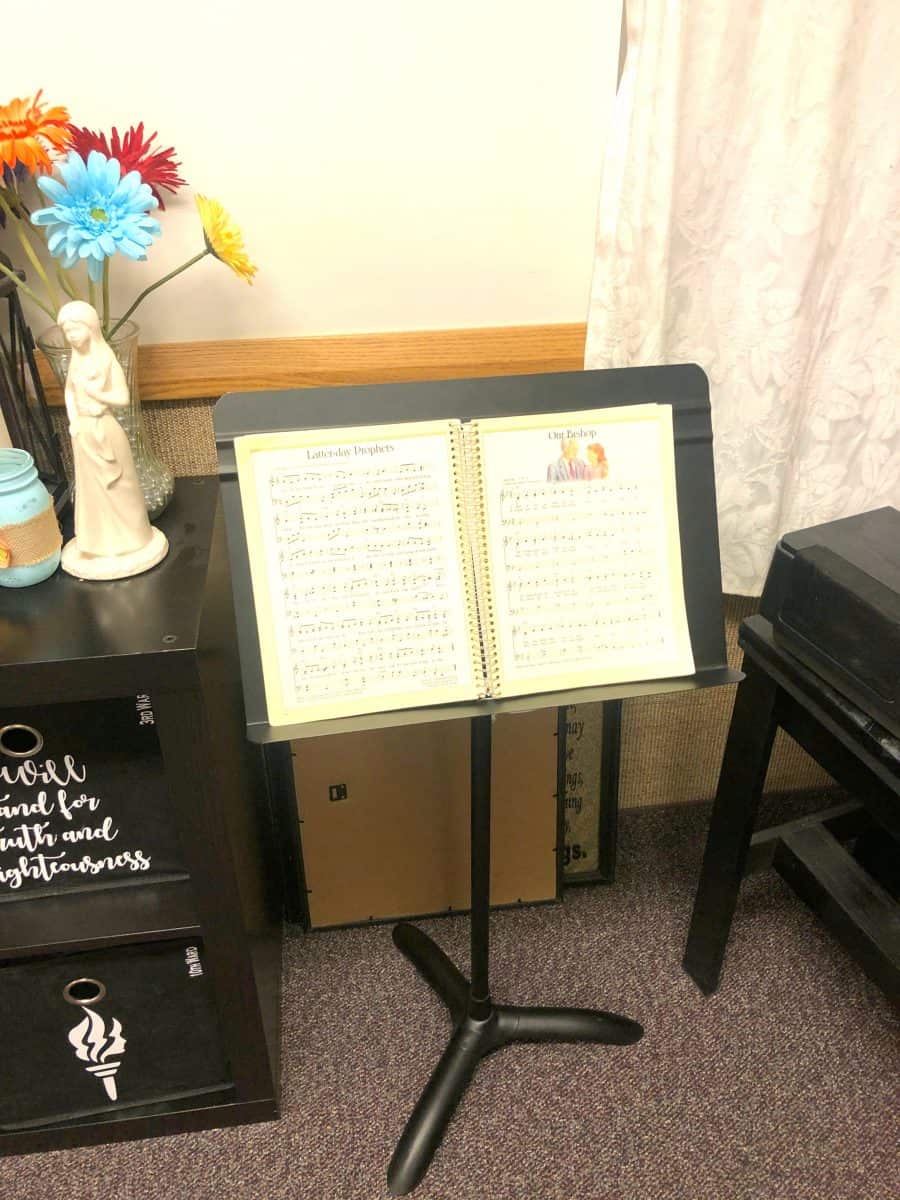 They did start pulling down the pictures and reading the backs looking for clues which I thought was really funny! Finally they got it and moved on to Room number 2

You could swap out instead of prophets you could do pictures of popular hymns or kid’s song -popcorn popping, happy birthday etc. The page number will be the lock number still.

The middle of the floor is the treasure chest with a number lock and a pile of books on the table. Remember- some books are never needed! They were just to throw them off the scent! I didn’t want to make it too easy! (They do need some books for room 3 but I just put all the stuff on the table in room 2!) The girls knew they were looking for 3 numbers to unlock the treasure 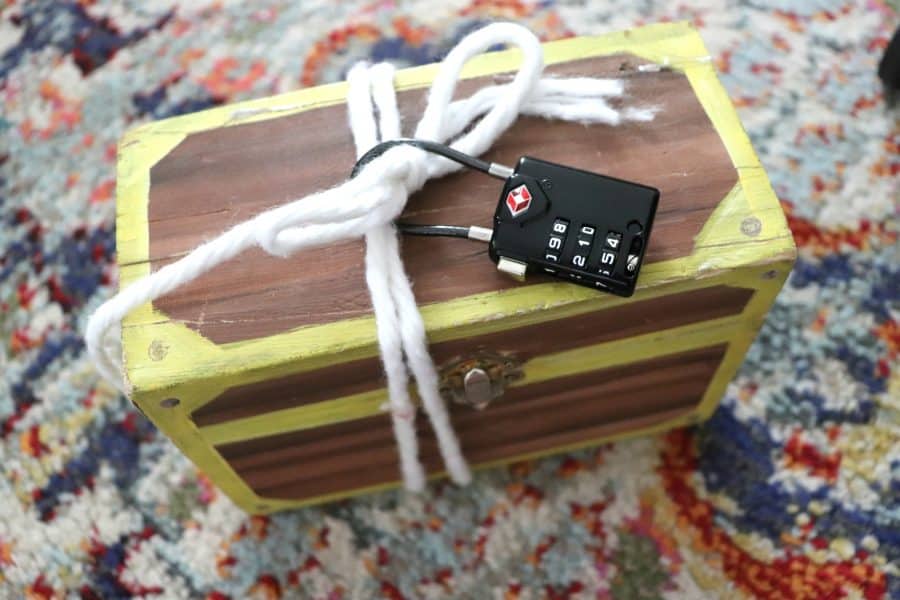 On the table was a piece of paper with a scripture written backwards and a mirror. So the girls naturally tried that as one of first things. You could fold up the piece of paper and place it in a book to make it a little more challenging! 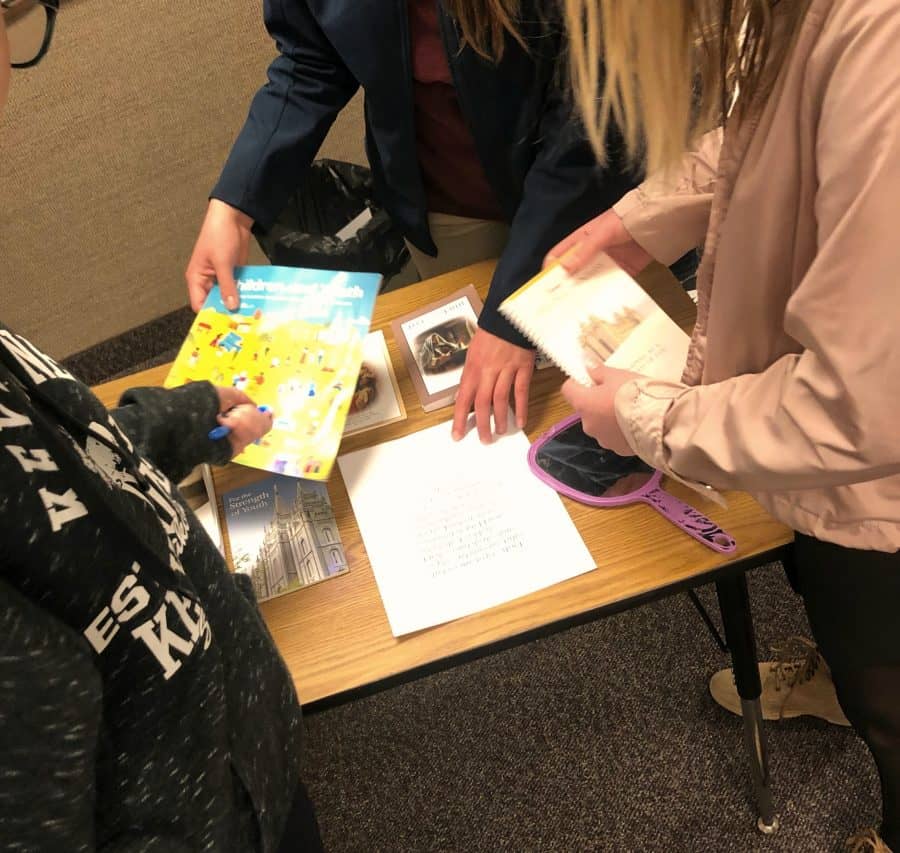 The scripture was our theme for 2020- 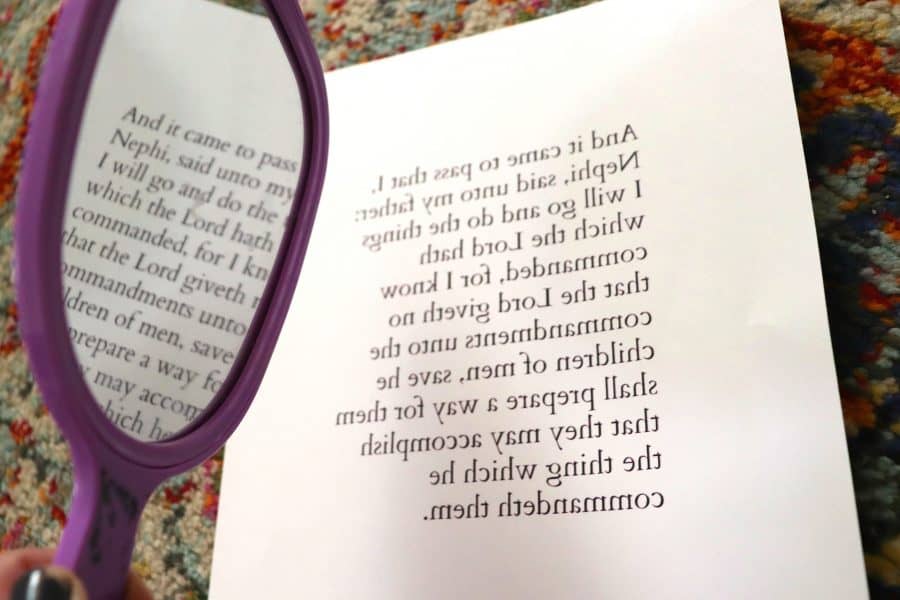 The scriptures were on the table- the girls looked it up to see if there was a clue on the scripture- but finally one girl  figured out 137 for the code. 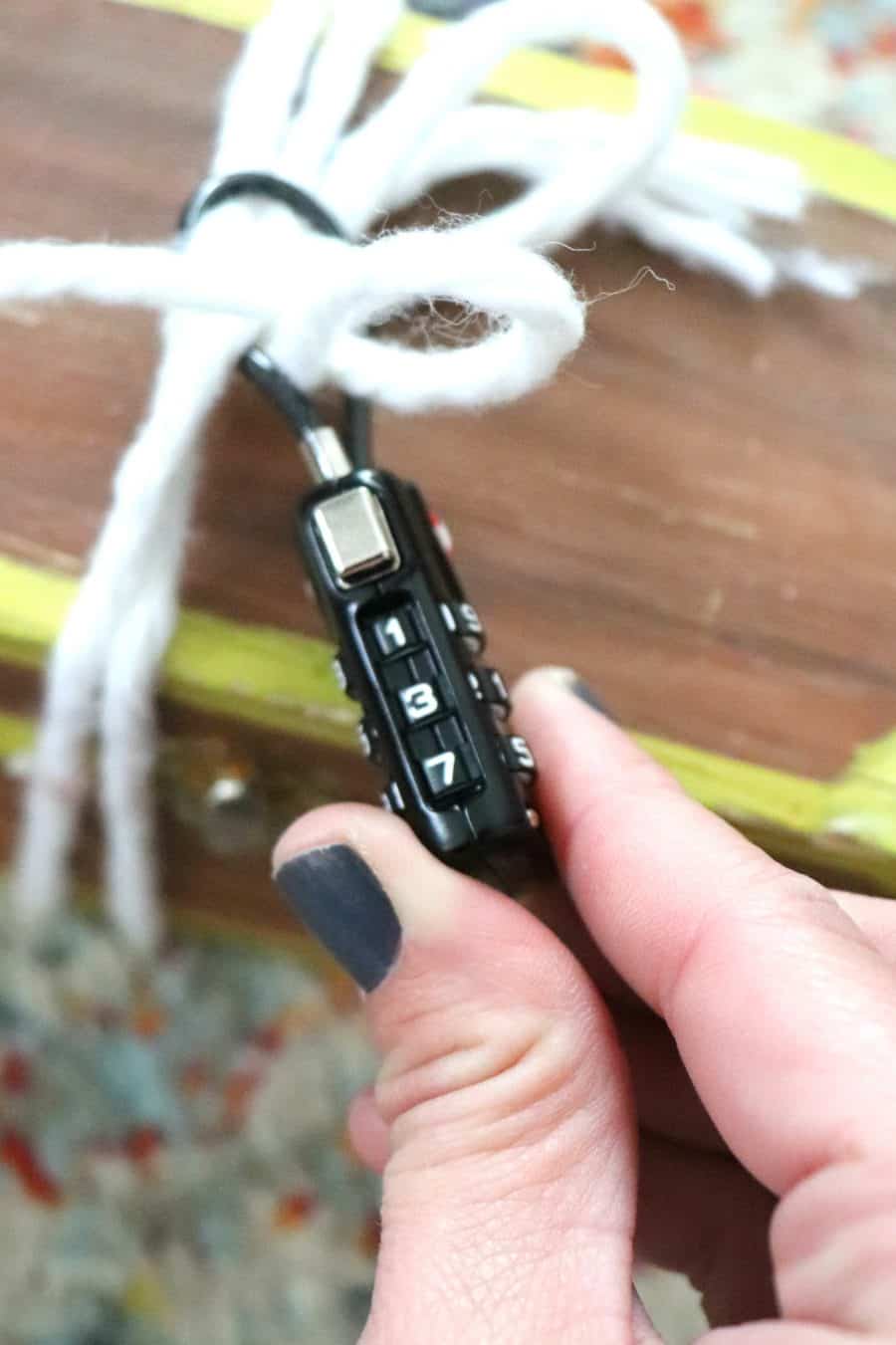 When they open it up- they found this: 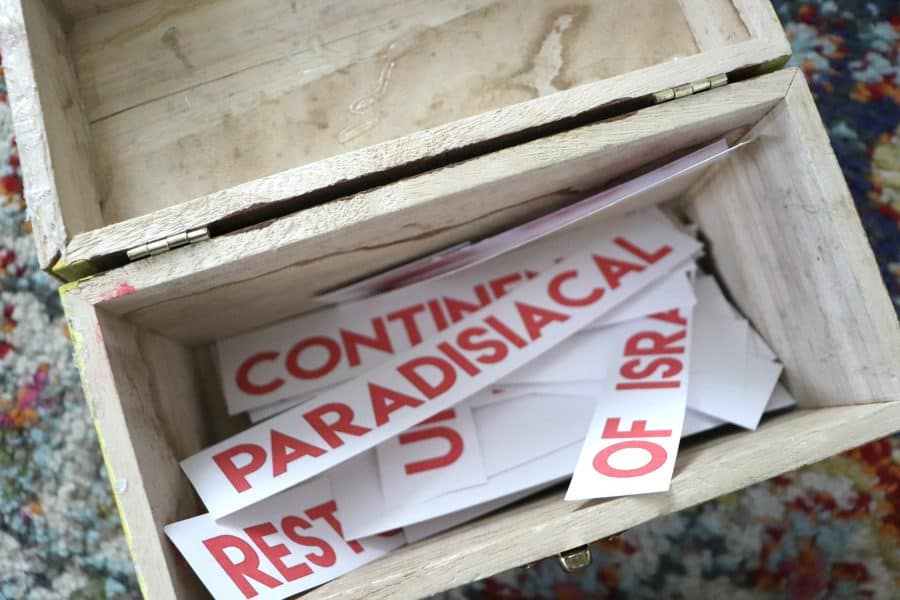 It’s an article of Faith all cut up. (I tried to pick a not so memorized one!) even though there are articles of faith in the scriptures and in some of the books on the table. The girls tried to piece it together! 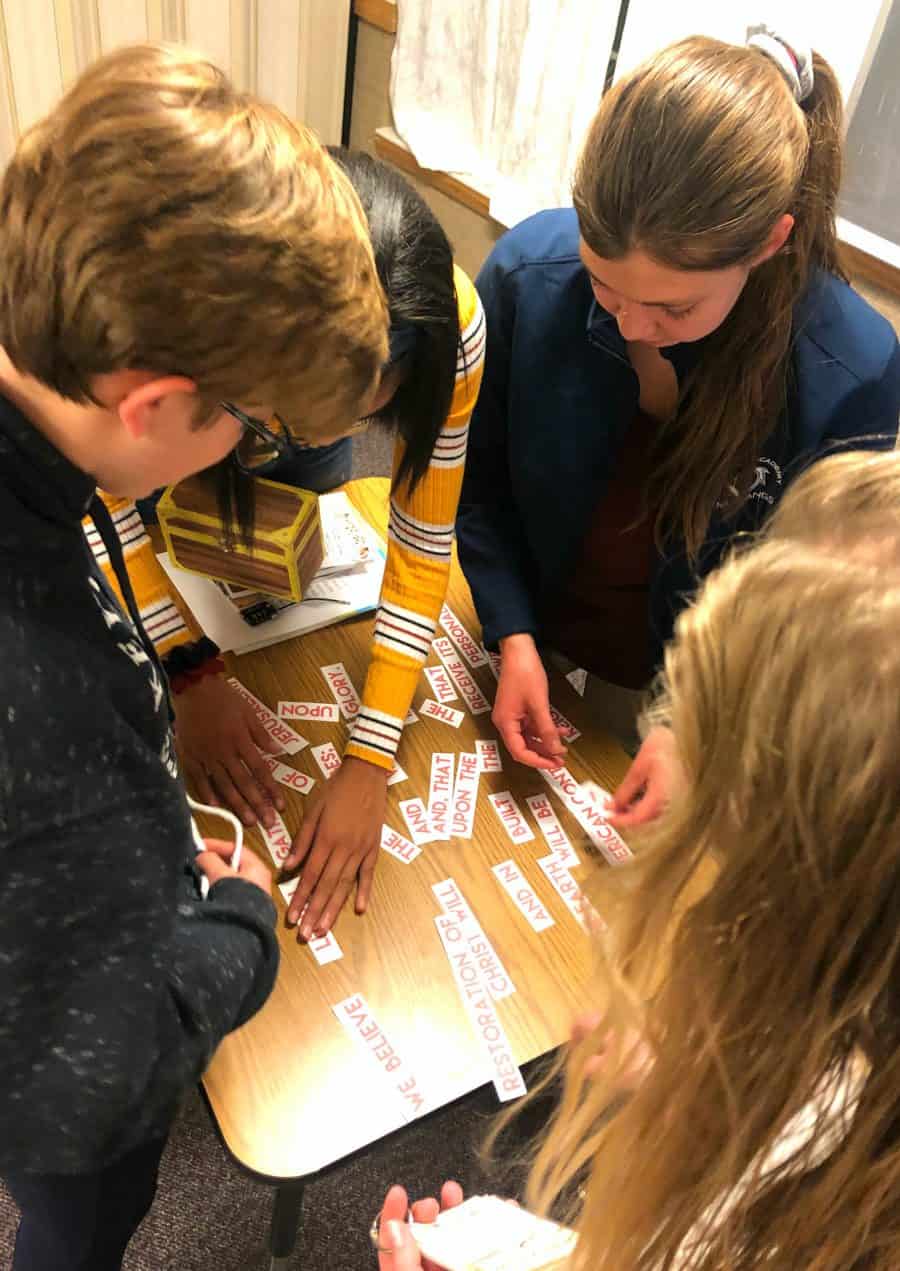 Boom open the lock and move into room 3! 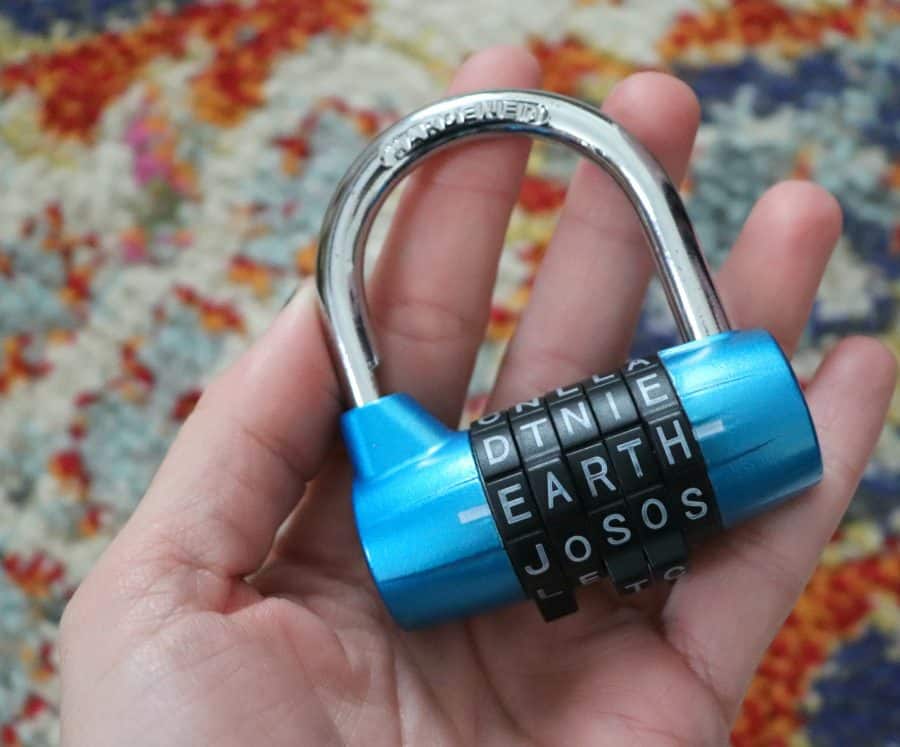 Girls walk into hangmen on the chalkboard and some missionary clues on the table. Also a big suitcase in the middle with a lock needing a key. 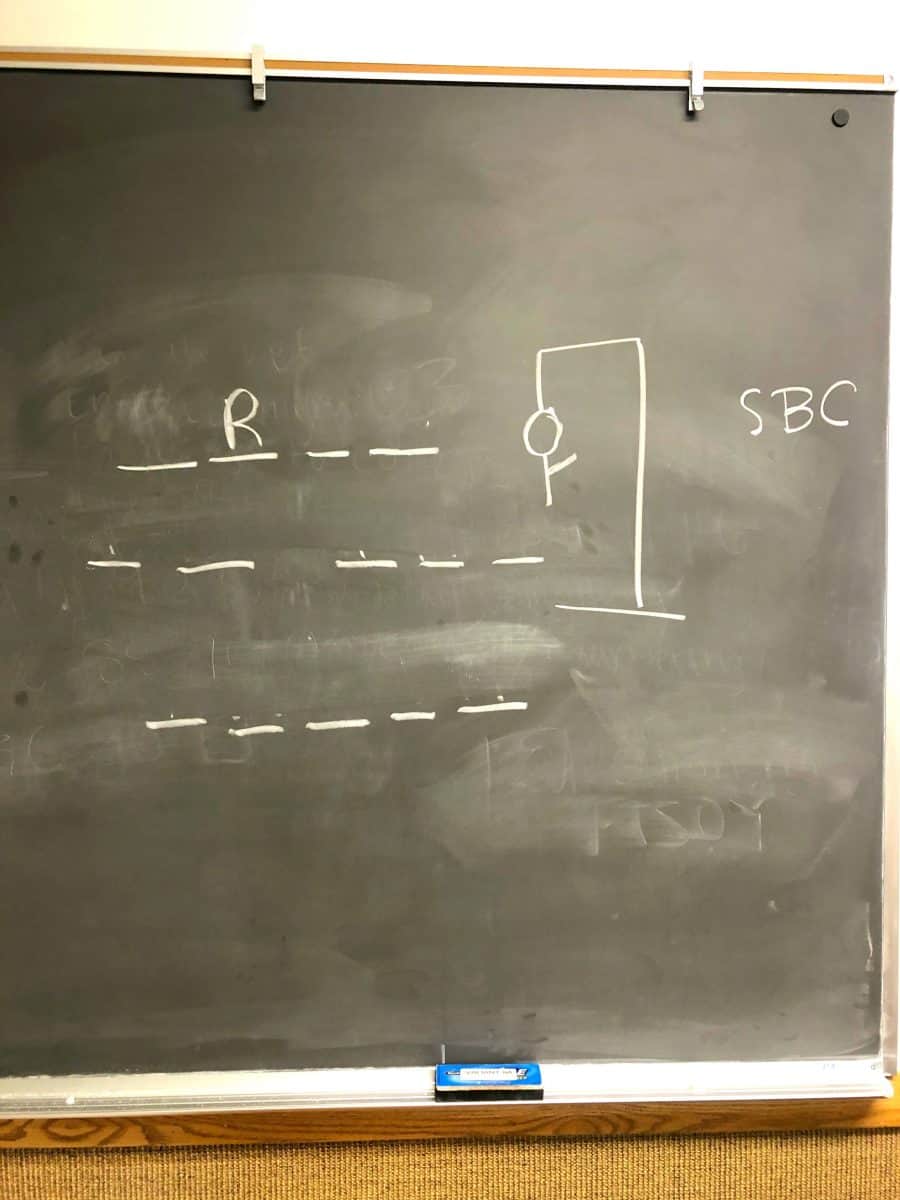 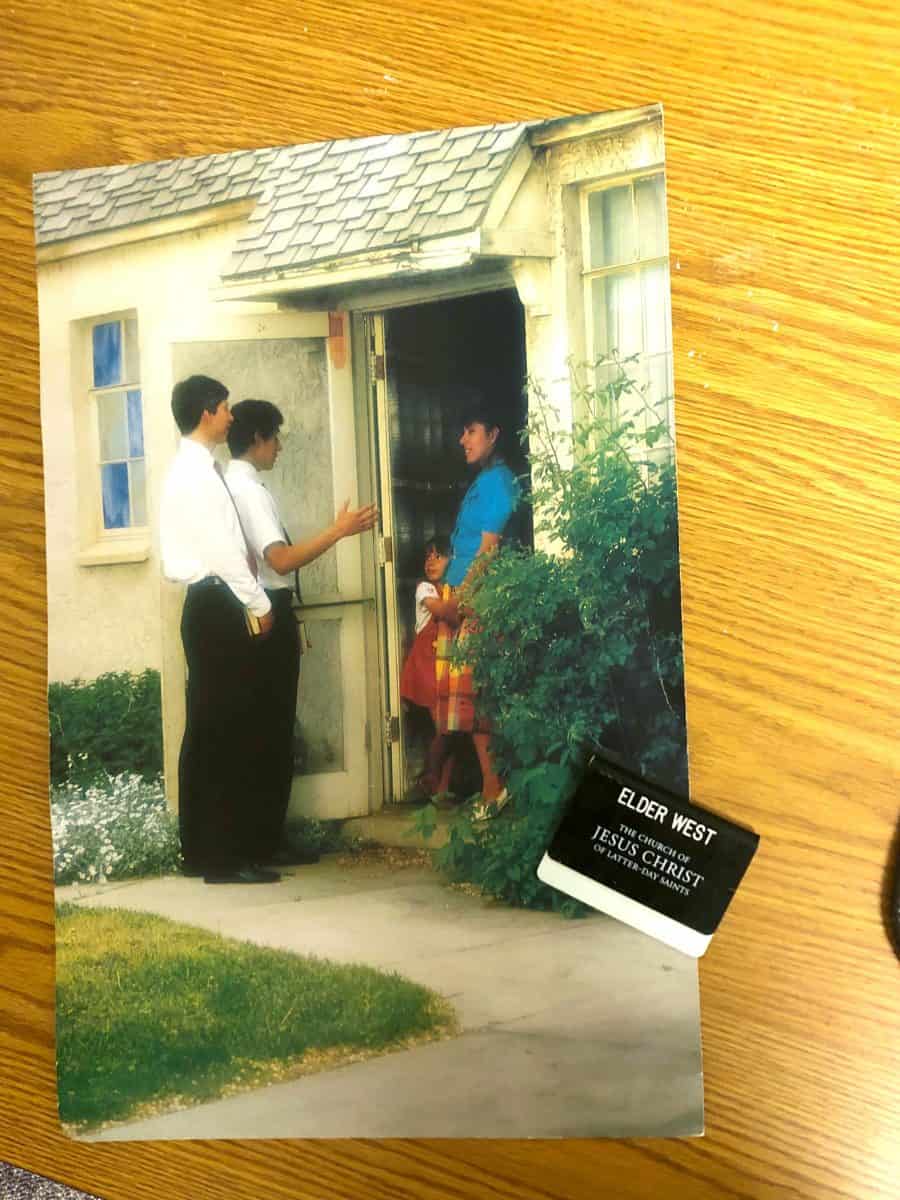 Hangmen solved is TRUE TO THE FAITH. One of the books in room 2- They guessed all sorts of things to do with missionary work- read the back of the picture. Thought about scriptures with missionary work. FINALLY, one girl guessed it! They got to the true to the faith book. In the MISSIONARY WORK section, I had taken that secret pen and wrote, the key is under the garbage. (I had taped it in case anyone picked up the garbage to look). Previously, one of the girls had noticed the pen and new it was a spy pen. It writes clear and has a black light on the lid to show the message. So all through room 2 and 3, she knew it was going to play in somehow and was shining it around. So when we got to this page and nothing was on it–she knew!!! 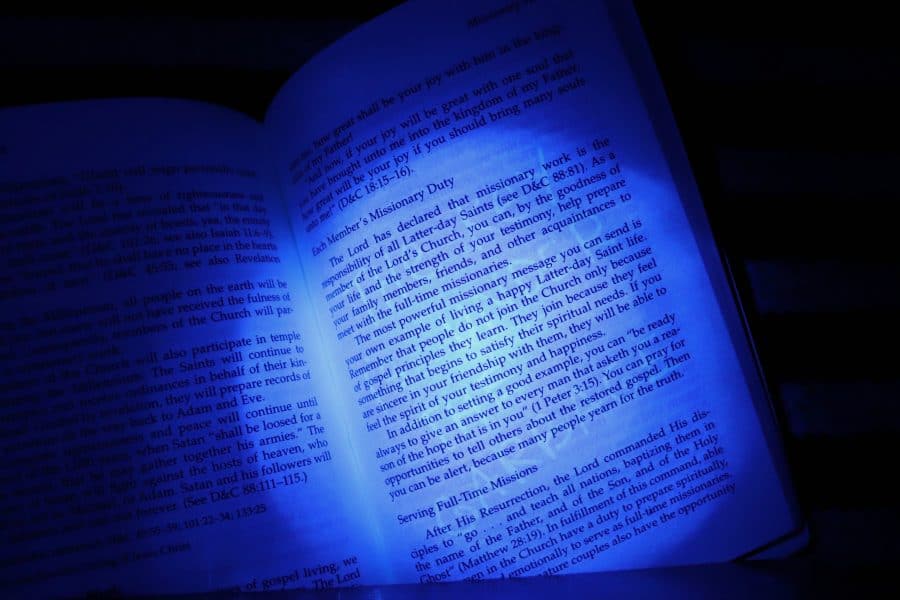 Unlock the suitcase and inside was the greatest treasure! Okay okay–we actually had some drinks and chocolate covered oreos in there too- but we did tie in a spiritual thought about how the Book of Mormon is a treasure! 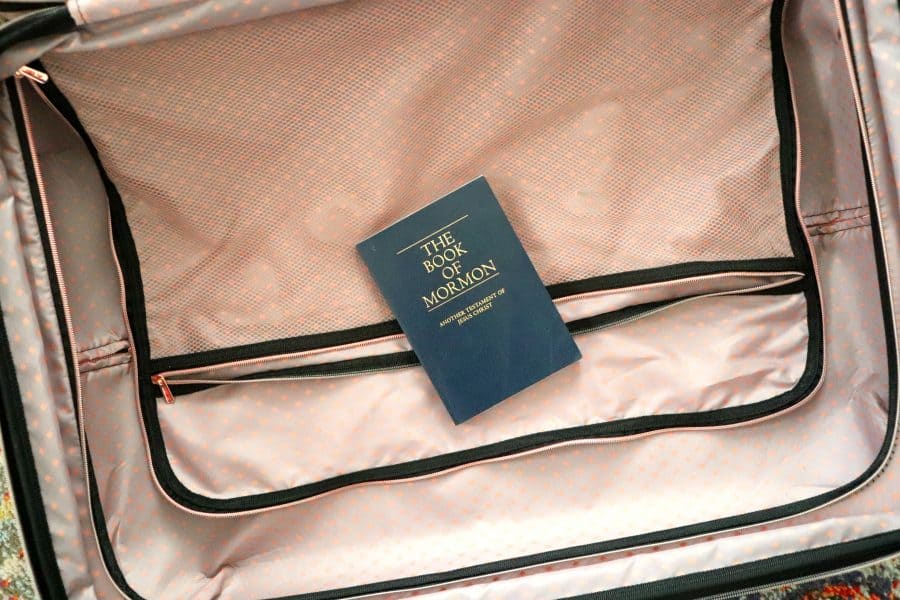 All in all- it took about 40 minutes. The longest room was the first one- and I credit that to the middle picture being harder!

I also printed out some hint cards. They could give them to me when they needed them and I would give them a hint. I would either point or have them ask a question and I would nod my head etc. The girls knew I knew–and kept turning and looking at me! It was hard not to confirm or deny anything! Try to be tight-lipped! It will last longer and it’s really fun to see the girls work together! 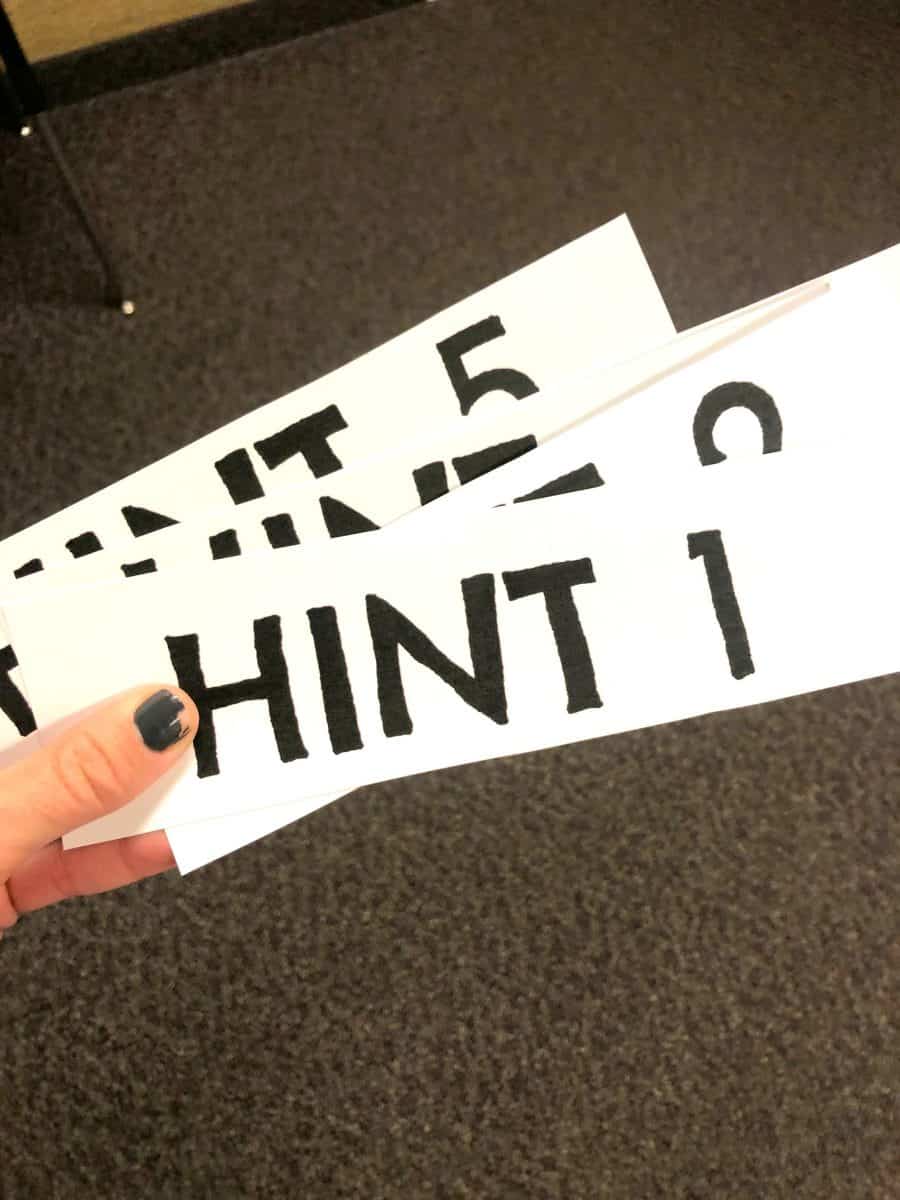 The article of faith scramble! They are all HERE– You can pick whatever one you want!

The Backwards scripture is HERE

and the Hints are HERE!

Here is the deal! I took what we already had and made it work. There are lots of different locks/songs/articles of faiths you could use! Don’t feel like you have to stick exactly to this! You could get one of these cool locks and put it with a different article of faith word that fits on it! You could pick a different scripture and highlight a word on that page that would open a lock etc! 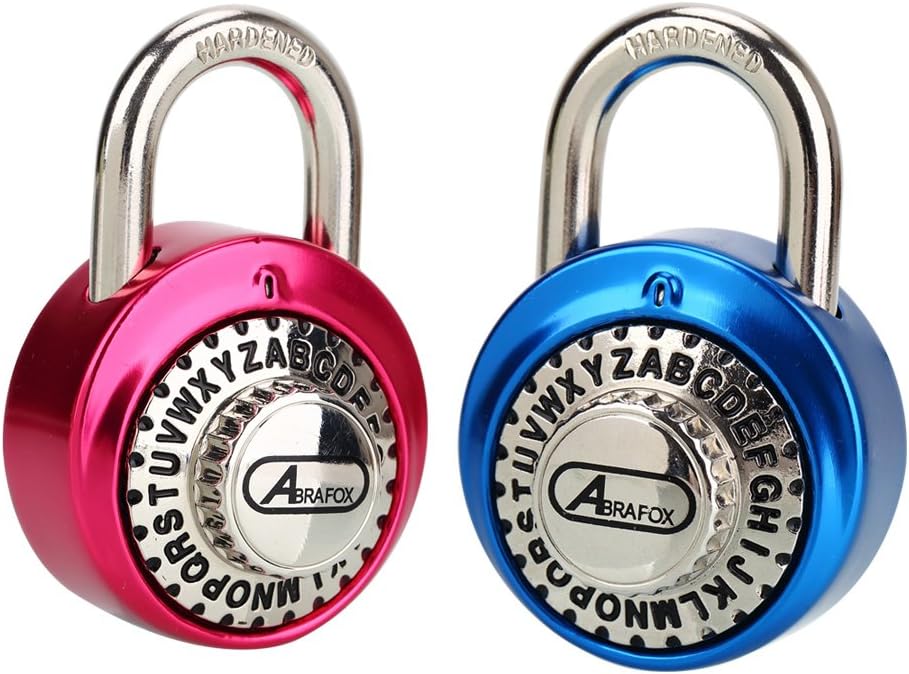 Head here to see all my church posts!