first: awesome frames over at pick your plum today!!! 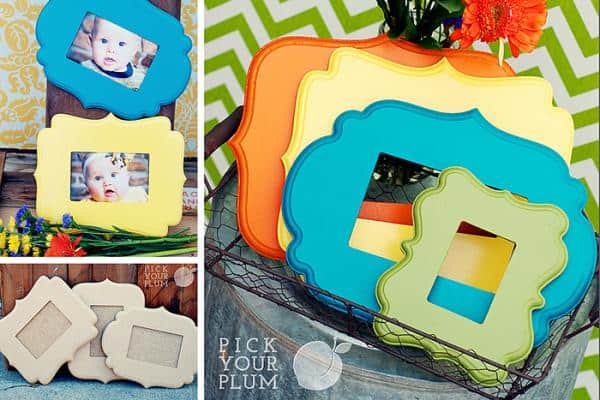 so–i made a belle beach cover up for my niece…

and my daughter’s birthday was coming up..so i thought i would make one for her. i scoured her princess dress collection and realized she didn’t have an ariel dress…so the little mermaid it was… 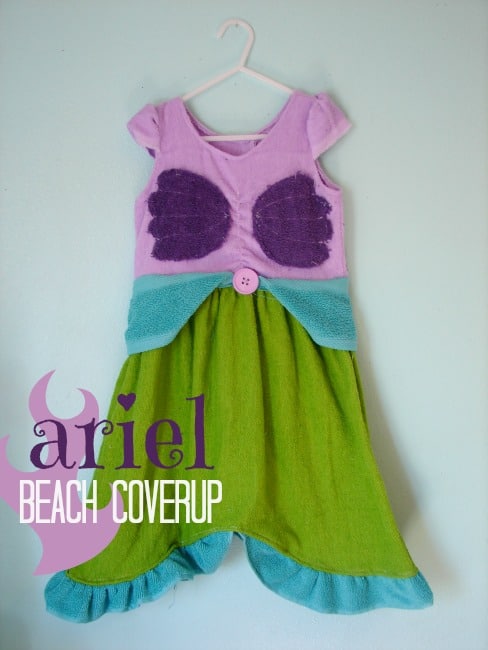 my daughter lives in the bath (and has an ariel swimsuit..) so i thought it would be a match made in heaven.

it wasn’t– she hates it. no. not hate. she just wants real fins…she doesn’t understand that i’m not going to carry her everywhere and she needs access to her feet!

anyways. when making this one i came across an awesome realization.

i had already bought the towels to make it…but i wanted to try out the this..so i kinda did a mash up.

second: it’s thinner than towels. good and bad. it’s much easier to sew through..but not as warm and cozy for the kids.

c: not a huge variety of colors. if i was doing belle.. i would much rather do a bright yellow than that pale one they have. There is pretty much every color of towel.

quad: the by the yard doesn’t fray as crazy bad as towels (probably because it’s thinner) but that belle one had yellow fuzzies all over my house for days~

end verdict: i would do mash up again. make main body of dress from thick fuzzy towels..add any embellishments with thin terry cloth.

here’s a lame tutorial for you: 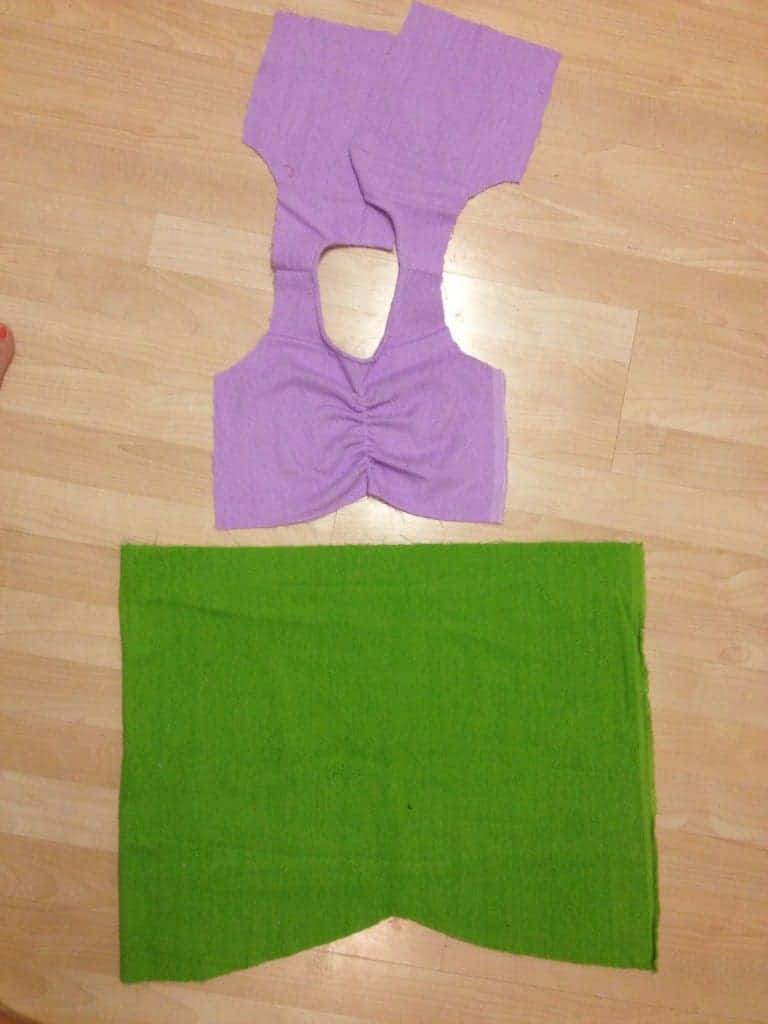 i bought 12 inches of purple…half yard of green (and used all of green in the skirt) i have a 12X12 purple left….cut out the top…and cut our the bottom. added some “tails”

i ran a loose stitch across the front to gather it up…and pulled the string then stitched over it again to keep it gathered. (this was before i was thinking about adding seashells.) 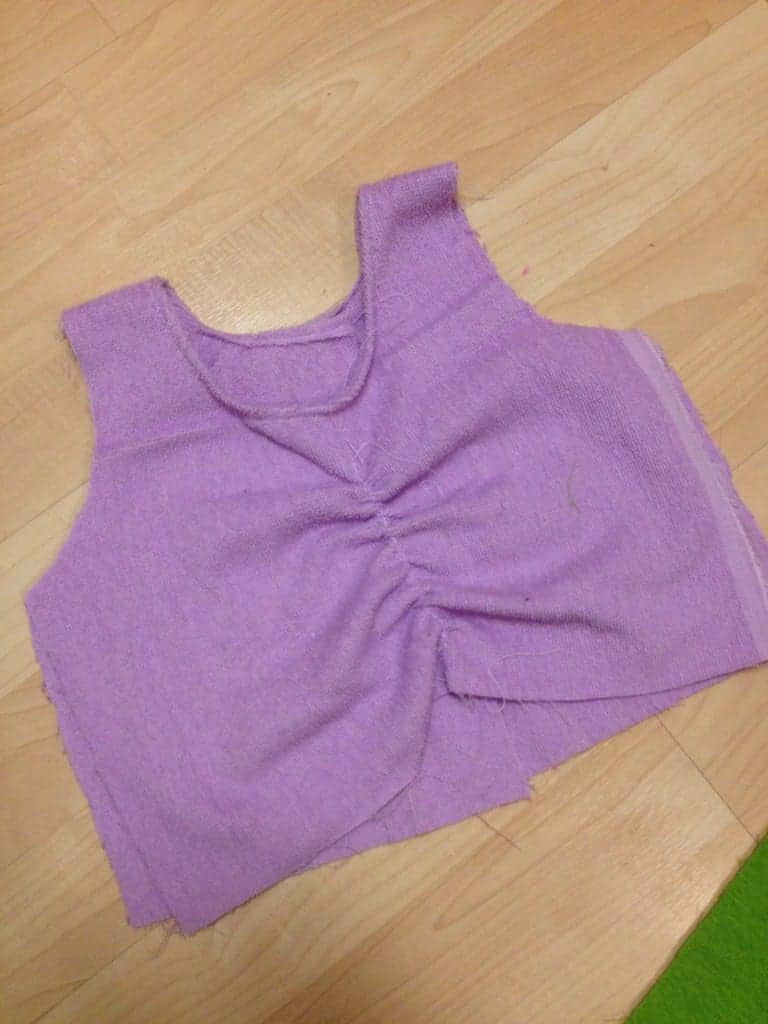 then i stitched on the top to the bottom. 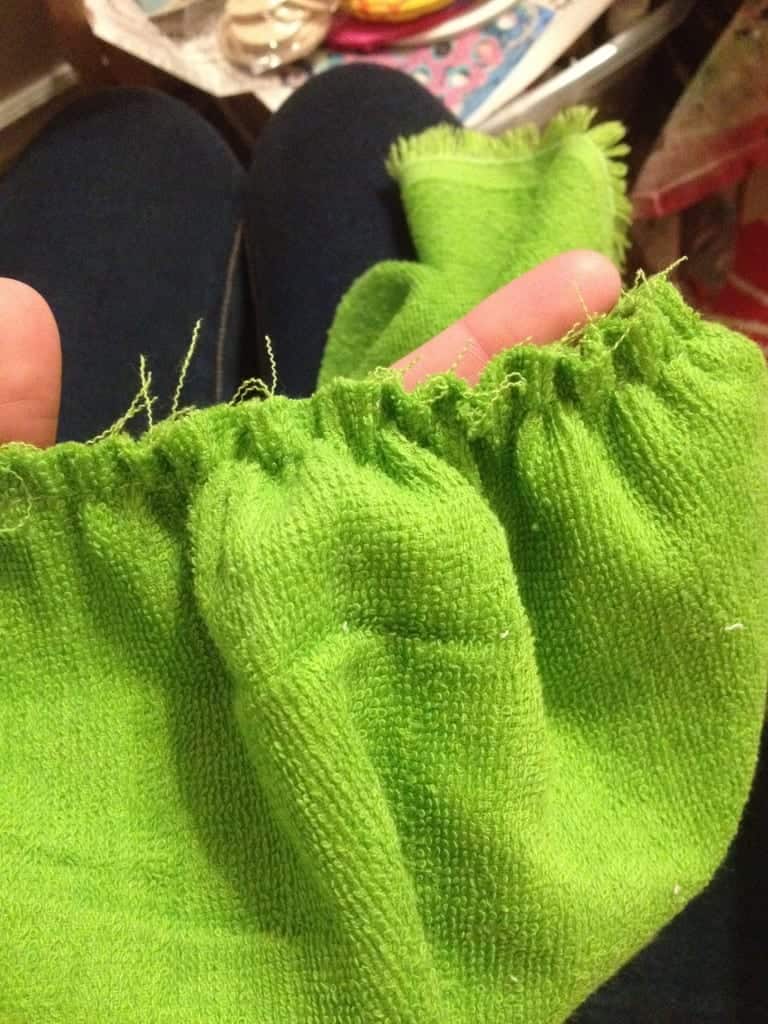 i added sleeves and was contemplated calling it done. it was plain but it worked.

then daughter comes in and sees it and says that ariel’s tail is blue not green.. 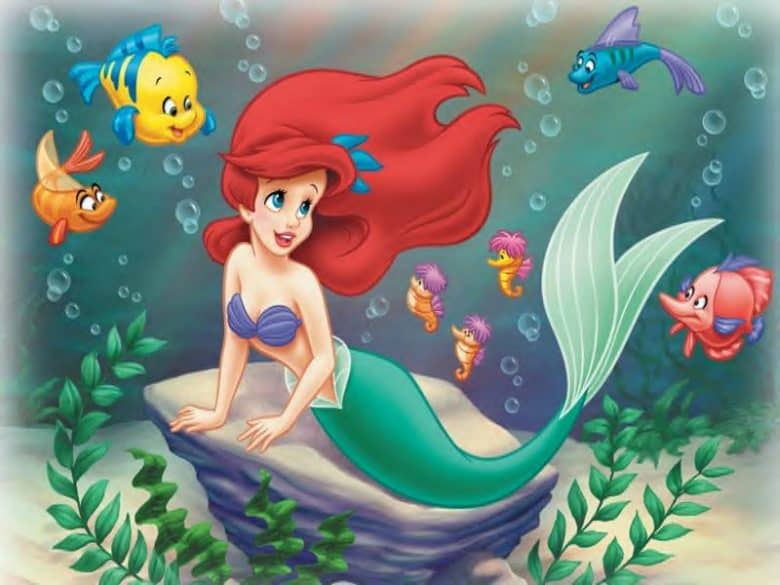 what it came down to…is that this was for my daughter and if she thought her tail was blue…than she wouldn’t be happy with green.

but i wasn’t unpicking the green…so i added a blue ruffle around the bottom and around the middle….. 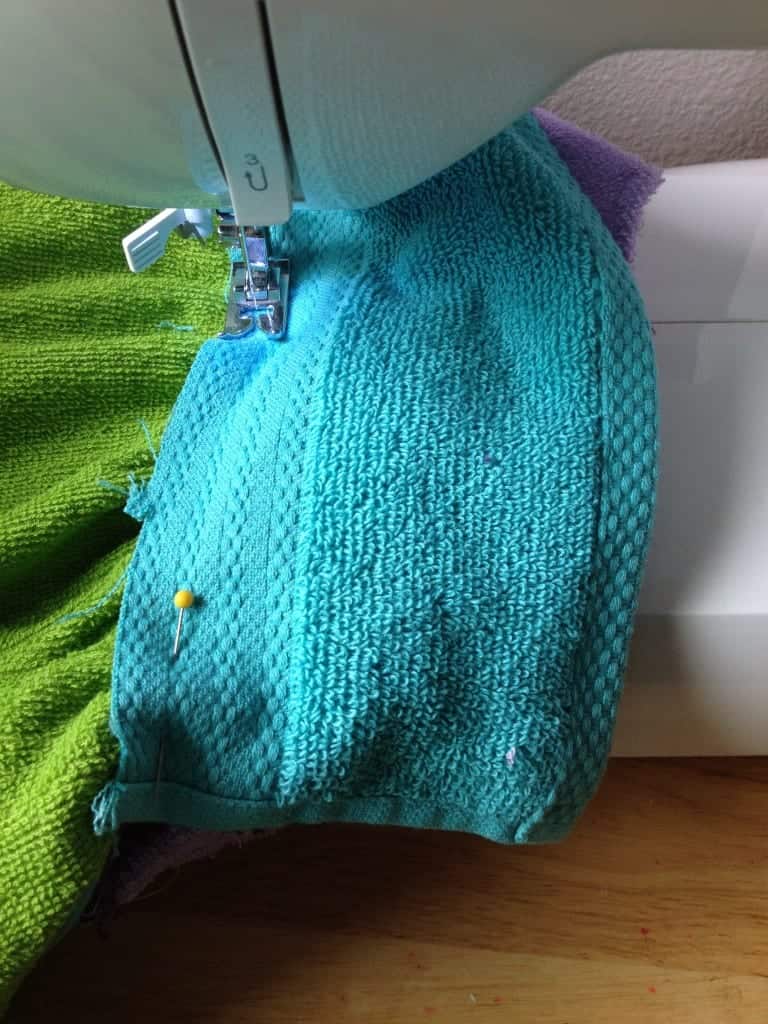 i wanted the blue to flip down a little bit..which left a weird opening. so i added a button. just think of it as her belly button. 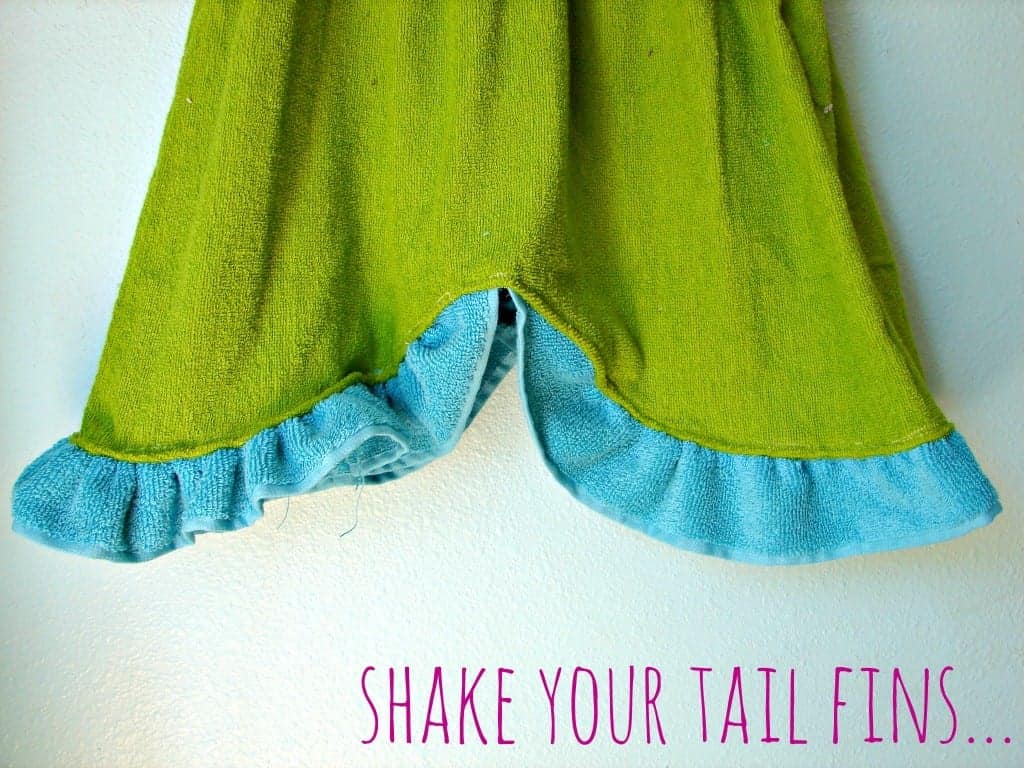 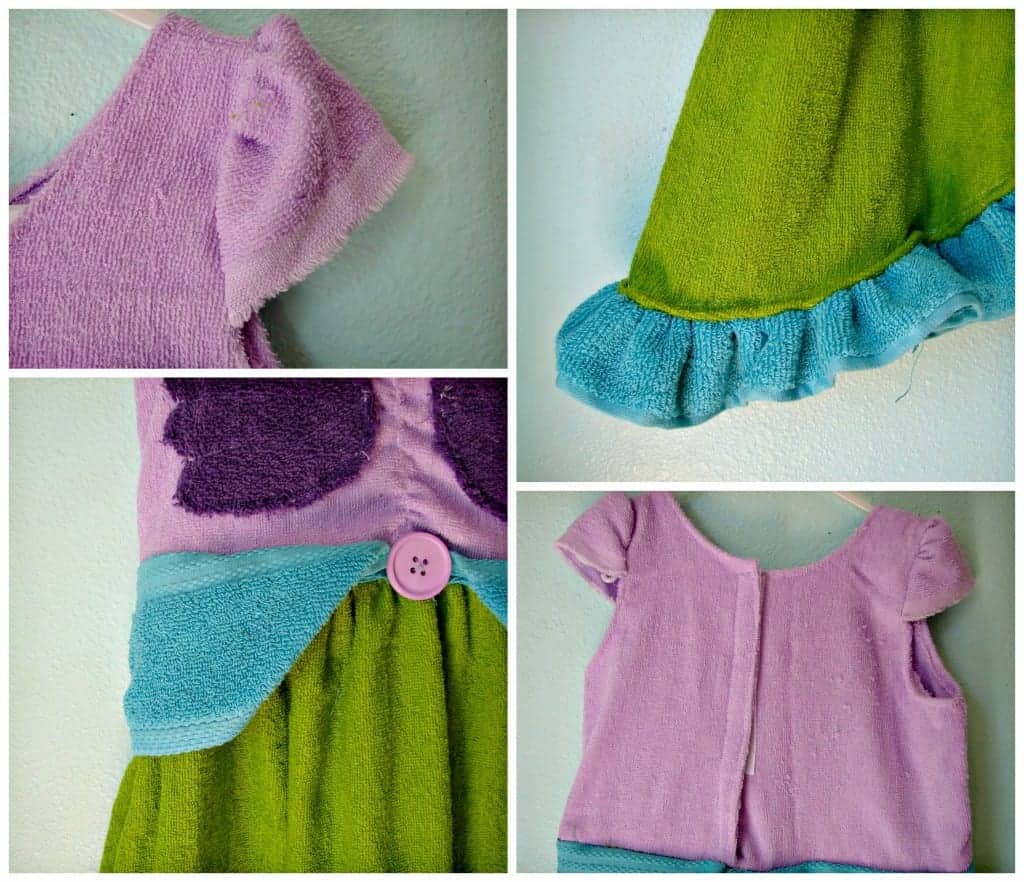 she’s still on the fence about it…but what you going to do?